There was a cyclocross training race yesterday.

Later this week I will further my sabotage of my cross racing potential by signing up for the Chainbuster 9 Hour race at Oak Mountain that is slap dab in the middle of cross season.

Sweet, they put up a map of the course on the site - which is unmarked...but no problem. I compared a couple maps and it looks like the route will be:

Good course choices, I hope the map they put up is correct. This is going to have lots of climbing and lots of rocks. That is a good thing.
Posted by John at 8:51 AM No comments:

How to, er, mount things.

Yep, no way to miscontrue that one.

Last cross season I didn't practice a single time and did fair at the races.

I have wondered many times why anyone would purposely go out and practice getting on and off their bike to get ready for cross. I mean, how hard can it be to get on and off a bike? I guess I should say remount and dismount to fall in line with the proper lingo. Turns out getting the whole mounting issue gets pretty tough at speed. I was always so exhausted in the races I didn't even notice how bad I was at the non riding parts of the race.

I noticed today. I took the Nature Boy out to ride the pseudo cross course at George Ward. The bike was awesome. 32 psi front and 35 psi rear feels like a good pressure and the brakes still do what they are supposed to. I like it.

I however, sucked. I can get off a bike pretty quick but discovered I do this stupid stutter step deal when trying to remount at speed. Think Michael Jordan pump fake before a jump shot...too bad it wasn't the '93 Finals or I wouldn't look like a bumbling idiot doing it. This effectively brings one to a halt to give a false sense of security when jumping back on a seat similar in layout to a fence rail. Go figure, I want security when jumping on something unyielding. The problem seemed to be unwillingness to actually jump off the left leg to get on.

After troubleshooting the hot water heater tonight I was still irritated with my pump fake remount and went to practice some more. I'm not fast doing it but I can now do it without the stutter step. Really gotta JUMP off the left leg and COMMIT to getting up there. Think cowboy jumping up on his horse. Maybe not having a big cowboy hat is the issue at hand here? Who knows, I have over two weeks to figure it out.

I still want to double up and race Andrew's J and B special tandem in the 4s race with him. Now that will be awesome.
Posted by John at 6:16 PM 1 comment: 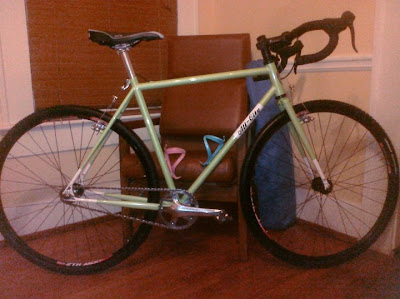 I rode it around some last night. Much like the other good handling bikes I have had - it rides like a bike. A very green and sparkly bike.

**Not pictured is a Tangle bag from Revelate Designs. I got the medium and it fits the 52cm frame like it was made custom. Good for DK200, Trans Iowa, or carrying lunch to work.

A more detailed post will be warranted once I have ridden it more but I will say the brakes are the best cantis I have ridden. Nose wheelies on pavement no prob, ya know, cos thats an important element of cross racing.
Posted by John at 8:26 PM 1 comment:

The weather for the 2011 edition of the Skool of Hard Nox 50 miler looked pretty grim on Thursday...and equally grim each of the forty times I checked over the next 3 days leading up to the race. Tropical Storm Lee was meandering up from the gulf towards Mississippi with 8 inches or so of rain predicted over the weekend.

This really threw a kink into the cost benefit analysis I had done of my 3 racing options for Labor Day weekend:

Boris, Jacob, and myself had already registered so off we went, ready for the worst. Boris wanted a good showing at his first endurance race. Jacob wanted redemption from a cramp filled suffer fest last year. I wanted to get the Dirty Kanza DNF monkey off my back and see what racing with a rigid fork on unseen trails was like for the first time.
I didn't want to preride but joined in anyway after killing an entire plate of mac and cheese. Thanks Charlotte! We did a proper preride, meaning we got lost until after dark and rode 20 miles 12 hours before the race start. Oops. It drizzled through the night and then quit right before we crawled out of the tent. There was no wind. God obviously wanted us to go suffer in the woods for five or so hours, time to get it on.

The Nox 50 course has two slightly different 25 mile loops with the majority of the race being twisty steep singletrack with most of the climbs clocking in around 2 or 3 minutes. I took a look around at the start before our beloved LeMans sprint to the bikes. I saw one other singlespeeder I knew, Old Faithful - Hardwick Gregg. This made me sad. Don't get me wrong, Hardwick is a nice guy and a good rider. Problem is he is old and has been kicking my ass by a small margin for years. I wanted to pace myself to not die on the second lap but promised to keep an eye on Hardwick and any other singlespeedy people.

On the gravel climb to the trail entrance I was feeling the effects of the ride Saturday night and not in a good way. I weighed my options and made it up to the top twenty only to have my efforts negated by a slight downhill leading to the Rabbits Run trail entrance. The trail was slippery, steep, and for the most part cambered in an unfavorable direction to my goal of staying upright. About halfway into this lap I could feel a rider coming up quick and did the automatic thing.

I then realized he was also on a bike with a single cog. Yes, I felt dumb. I would later find out this was Boomer Leopold from Team Locos. Strong.

The rest of the loop was uneventful and I ended up in small group with David Darden from the Ham and one of my singlespeed competitors - Drew from Mobile. Drew was good to ride with so we agreed to work together. Hmmm. This happens on road bikes and in gravel races but never in a mountain bike race. You just cannot work together. It does not make sense. Instead of pleading my case, I simply said, "okay," and pedaled on. We came out of the woods to see the lake that the start/finish is on. To get across part of the lake we rode on these old boardwalks that were slimy from the rain.

Ever the cautious and helpful racer, I advised Drew we should be careful. As we came up on a right hand turn ON the bridge I saw Drew's tire slide out in slow motion and him slide halfway off the bridge. I immediately followed suit but time failed to slow for me and I ate it also. What the hell? Easily the most violent, abrupt crash I have ever had. At least I slid a long way on my right hip for style points. We came into the pit area together and Joseph Dabbs told us we were near the front of the SS race. Great, now I had to figure out how to get away from my riding company.

I waited for a chance to get away and at some point waited on Drew to fix his saddlebag. I certainly wasn't going to attack a man fumbling with tubes and CO2 cartridges on the side of the trail. Now a man whose tire slips off a root on a climb? Fair game. With twenty miles to go I decided I should probably start racing at a less casual pace if I wanted to avoid another Hardwick beatdown.

I finally got into some sort of good riding zone and began to ride the downhills and singletrack well. The Niner fork was performing well and I was feeling good. I came into the 37 mile aid station and put two Nuun tablets in a bottle, making sure to put the lid on gooood and tight so none of my precious electrolytes would escape. Tropical Storm Lee had created a nice cloud cover for us and it felt great in the woods. The steep climbs were beginning to hurt me. I had been on a mission of pride and foolishness to not hike ANY climbs during the race and my forearms began to cramp, putting me in a posture that was more velociraptor than mountain biker. I spent the the next two miles of fire road doing a brachioradialis deep tissue massage rather than eating or trying to go fast. Gotta have priorities, I suppose. Side note: Nuun gets close to combustion level when left tightly sealed due to the carbonation. Lets just say my sinuses and eyes were well rinsed when I finished the race...

The massage worked and I was back on my game until I began the ill advised practice of asking aid station workers how far to the finish.

Argh. I had to get out of the self induced mental block from the time estimates and turned my clock where I couldn't see it and resigned myself to riding as hard as I could until I saw those wonderful slippery boardwalks again. Once I was able to focus on riding again I had a blast on the trail and was soon rolling through the campground. Thank God, I could finally quit pedalling. These races are like self serve yogurt, a good portion makes sense but why do that when you can fill it to overflowing and forge ahead til you feel like death?

Anyway, race was done and so was I. Boris handed me half a Bud Light of unknown origin and I got the rundown from Dabbs. Bici Coop had done well.

Second place singlespeed and ninth overall in 4:34. I finally took down Hardwick and won a cool ceramic mug.
Boris got fourth in Men Under 40, fourth overall, and fastest second lap of the race. Good enough for a first effort, I guess. Here is the Strava of his race and "preride".

Jacob had a deja vu from last year, cramped up in a ball, but managed to avoid death and finish with the help of some pickles.

Awesome race, awesome promoters. DO IT if you get the chance. Glad I made it to this one.
Posted by John at 7:40 AM 2 comments: